A depressed teenager who was hit and killed by a train had previously broken up with her boyfriend and walked out of a mental health unit just days before her death, an inquest heard.

The former Beauchamps High School student had a history of depressionand suicide attempts and it had been recommended she went to Basildon hospital for mental health treatment after a paracetamol overdose on April 3, 2017.

Then in May 2017, Megan reported suffering suicidal thoughts.

The inquest heard how Megan was upset and crying at a friend’s house in the toilets which led the friend to bring her into hospital on May 17.

Megan had said she ‘had had enough’ and ‘didn’t want to do it anymore,’ as she struggled to get on with life and was stressed about coursework. 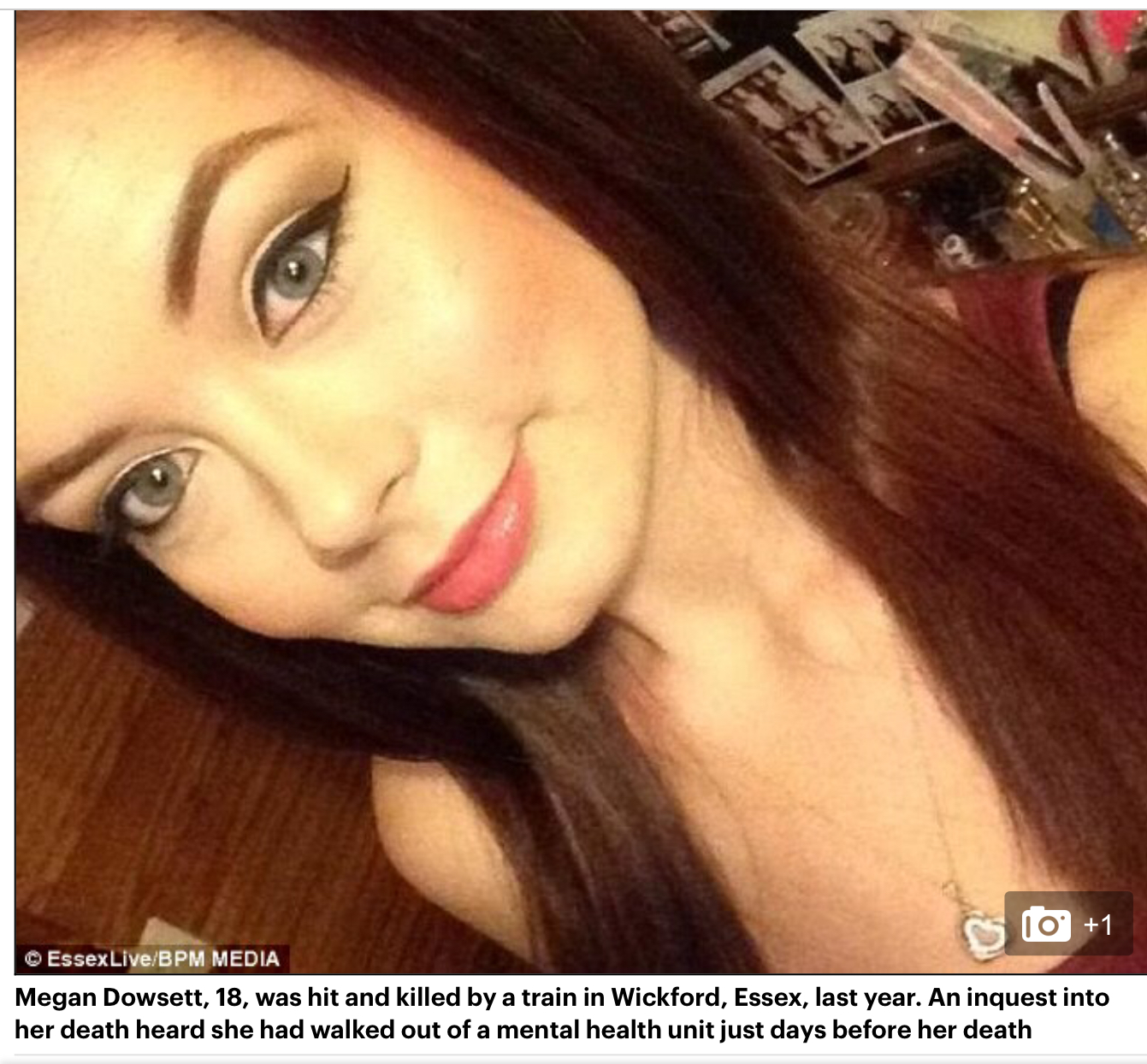 The teenager was then assessed by a mental health nurse at Rapid Assessment, Interface and Discharge (RAID) who transferred her over to Basildon hospital for a further assessment.

Dr Khalid Salim, who works for Essex Partnership University Trust (EPUT) at Basildon hospital as part of the mental health assessment unit, and first assessed Megan on May 19, 2017, was called to give evidence at her inquest.

The assistant coroner asked Dr Salim about a report from September 20.

Dr Saleem told the court: ‘She seemed cooperative coherent, fully orientated, maintained good eye contact, quite interactive and had been laughing and joking.

‘At the time of the review, one of the biggest stresses was the breakdown of her relationship a couple of months ago. She had been with her boyfriend for 16 months.

‘He told her that he didn’t love her anymore. She was also struggling with her coursework and they were two of the major concerns she expressed to me.

‘I did explore further enquiries about what she was thinking and what her intentions were and she said she thought about going to Wickford train station but did not go there, she did not attempt it.’

Prior to the assessment they went through Megan’s records which had shown Megan had attempted an overdose on April 3 and was subsequently reviewed by a mental health team.

She first took an overdose at the age of 15 and was transferred to Child and Adolescent Mental Health Services (CAM) where she was diagnosed with depression and borderline personality disorder.

Megan had a history of self-harm and had deep cuts on her hips from the age of 14 and also tied ligatures around her neck.

During the assessment, she told Dr Saleem she had plans for the future and wanted to complete her education and go to Leeds University, where her boyfriend attended, in the hope they could re-start their relationship.

The consultant psychiatrist told the inquest that Megan did not meet the requirement to allow him to detain her against her will but she did allow him to speak with her mother Denise.

Her mother picked her up from the mental health unit later that day.

Michael Deacon, representing Megan Dowsett’s family, then questioned Dr Saleem and referred to the RAID assessment of Megan that was carried out the day before the doctor’s assessment on May 19.

The mental health nurse recorded that Megan had been having suicidal thoughts and ‘didn’t know if she could keep herself safe at home.’

‘Surely you were aware of that assessment?’ Mr Deacon asked.

‘I was aware of that and if I could refer to going back to her history and behaviour of self-harm. Her mental state was completely different,’ Dr Saleem replied.

‘She did not think that the community mental health team, could manage Megan and were concerned about the risk at home. This was from a mental health nurse just 24 hours before your assessment,’ Mr Deacon said.

‘I did ask her to stay considering all these things, I used my cognitive behaviour skills to address these issues and make her understand that we wanted to keep her here and I wanted to arrange a meeting with her mother but she declined to stay,’ he responded.

The report also stated Megan said she would feel sorry for her family but this would not stop her from suicide as she would not be there to see their reaction.

‘In your experience, surely a factor with someone experiencing suicidal thoughts would be if they had a reason not to follow on from it and quite often that would be the family,’ Mr Deacon added.

‘I have to repeat that I wanted her to stay for a further assessment and so we could explore a little bit more before making a formal discharge,’ Dr Saleem replied.

The report also described Megan as ‘unpredictable’ and ‘impulsive’ and heard how the teenager thought she might need to go back to hospital but also that she didn’t want to.

Mr Deacon continued: ‘She felt she was going to do something. Doesn’t that box on the report tell you that this is someone who has identified that they need help?’

‘That does yes,’ Dr Saleem replied.