An Epping Forest army veteran was in “a dark place” in the months leading up to his tragic death, his family have said.

An inquest into the death of Kirk McLaughlin finished today (Friday, August 3), with the coroner reaching a conclusion of suicide following a three-day hearing.

The veteran, who served in the parachute regiment, had suffered with his mental health for a number of years and was found dead at his home in Buckhurst Hill on November 21 last year.

The 36-year-old had a history of anxiety, depression, bi-polar effective disorder, paranoia and had previously self-harmed.

In 2013, Kirk, an aspiring artist, left the army after serving for 12 years in the para 3 regiment, and was deployed to Northern Ireland and Afghanistan. 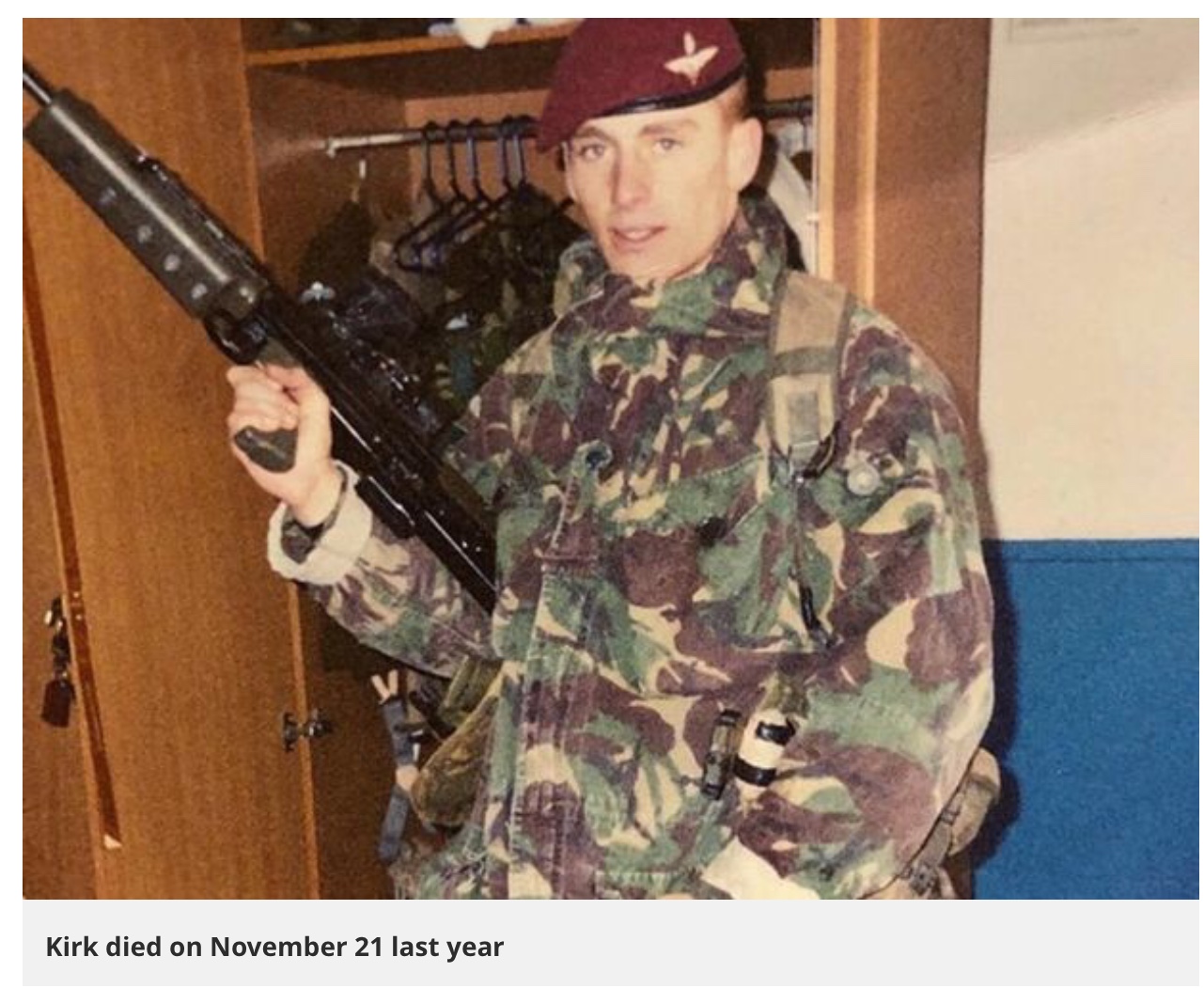 A hip injury meant his career in the forces could not continue, and he suffered from constant physical pain even after an operation.

His parents, Denise and Kirk McLaughlin Snr said: “Kirk was a much-loved son, father and brother. He proudly served his country for 12 years in the Parachute Regiment and during his service was deployed to Northern Ireland and Afghanistan.

“After Kirk left the army in 2013 he was able to develop his talent as a visual artist exhibiting his work in London and Glasgow and winning a prestigious Armed Forces Art Society prize in 2017. Kirk excelled at everything he turned his hand to, whether that be his career in the army or his artwork.

“Unfortunately, Kirk suffered from constant and severe physical pain as well as from as mental health problems for many years, and after he left the army these gradually got worse.”

On the day of his death, Kirk’s former partner and friend, Amanda Ayling, told the court how left his flat at around 6am for work and but became concerned as she received no reply to texts or calls made to him throughout the day.

“When I got back to the flat, I put my key into the door but I couldn’t open it, it was like it was bolted on the other side,” she said. “I started knocking and I was starting to get really worried.

“I called the emergency services, I think I called the police first and then the fire service. I think I phoned Kirk’s dad and he said: ‘I will let his mother know.’”

The door was broken down as the emergency services entered the property, and they sadly found Kirk dead at the scene.

“I just wanted to help him”

Miss Ayling told the court how the pair first met when she was working at Barclays on a program which helped former military personnel to find employment.

She explained how she helped Kirk to find and secure a job by acting as a mentor.

“I just wanted to help him, I liked him. He was very open about himself which I admired, he wasn’t a closed book.”

Soon after Ms Ayling left her job at the bank, the pair started to meet up and became friends before eventually moving into a property at the bottom of Kirk’s parents’ garden.

She described how Kirk’s moods would fluctuate and how he would often see and hear spirits who would tell him not to talk to her because she was a “bad person” who could “not be trusted.”

Shortly before Kirk’s death, the pair went to Glasgow where the former paratrooper received an award for his artwork.

“He was feeling positive about pursuing a degree,” Ms Ayling added.

During the inquest, it was revealed how Essex Partnership University Trust (EPUT) and other NHS mental health services in Essex had seen Kirk for various appointments regarding his mental state.

He struggled to engage with the services, and found it difficult to open up to medical professionals.

Michelle Brown concluded that Kirk committed suicide, but suggested mental health services to do more to protect veterans struggling with their mental health.

She said: “I am satisfied that the short form conclusion is suicide. That is the conclusion I will return.

“I am satisfied that Kirk James McLaughlin intended to take his own life. He died as a result of a deliberate act.”

She added: “I will be making a report to EPUT and the NHS to prevent further deaths such as this.

“I am concerned that circumstances revealed in this inquest could lead to further deaths or suicide.

“This report will be around a review of procedures, especially involving veterans and those with a lack of engagement with the mental health services.”

Mr and Mrs McLaughlin believe their son needed specialist intervention due to his fragile state of mind and the dark place he was in months before his death.

They believe veterans need more support than what is currently available.

“At the inquest, we heard a lot of evidence about Kirk’s fragile state of mind, and the dark place he was in during the last the months and weeks of his life,” the parents said.

“We, along with Kirk’s brothers and sister made it clear to Kirk how much he was loved and cared for by all the family, but Kirk needed specialist intervention from mental health services and sadly this did not happen.

“Unfortunately, we know from Kirk’s army colleagues that many veterans need more support than they are getting.

“We are pleased that after hearing all the evidence in this inquest, the coroner decided to report her concerns about Kirk’s mental health treatment to both NHS England and Essex Partnership University NHS Foundation Trust and that she will also recommend that there should be a review of the procedures for veterans seeking access to mental health treatment, and also a review of the procedures and communications where veterans disengage from mental health services.”

“We hope that from Kirk’s case the government will take action to ensure that veterans receive specialist mental health care and support automatically and for as long as they need it.”

“We will never have our son back, but we hope lessons can be learned to prevent future veterans suffering as Kirk did.”

Family believe ‘multiple failings’ may have led to Kirk’s death

Kirk’s family believe that the evidence heard at the inquest confirms their view that failings by various health services may have contributed to their son’s death.

Nandi Jordan, who represented the family said: “The evidence we have heard at the inquest confirmed Kirk’s parents’ belief that that there were multiple failings which may have contributed to his death.

“After leaving the army Kirk received specialist help from Veterans First, and this service was successful in coordinating his care and treatment and supporting him, but this was not a service which offered long term treatment.

“As a result, Kirk was transferred to his local Community Mental Health Service, Essex Partnership University NHS Foundation Trust, where we learned he was discharged without a proper assessment being completed of his long-term mental health needs.

“Kirk received ongoing support from the Parachute Regiment including funding for private therapy.

“When the funding for this treatment ran out, Kirk’s private therapist repeatedly contacted the Access and Assessment team at the Essex Partnership University NHS Foundation Trust to make them aware of the risks in Kirk’s case and to make sure he received treatment from the NHS, but the Court has heard that the information recorded by the Trust was neither reviewed nor acted upon by Kirk’s Psychiatrist.”

Kirk’s family ‘devastated’ by his loss

“Kirk, like many ex-servicemen and women, had particular needs when it came to his mental health, including distrust of civilian staff and difficulty engaging with civilian health services,” Ms Jordan said. “The services available to Kirk from the NHS were fragmented and inconsistent.

“We heard at the inquest that basic steps like properly reviewing Kirk’s records before discharging him and contacting his family to discuss his mental health were not taken.

“We are pleased that the Coroner recognised the particular problems faced by veterans accessing mental health services and has decided to make a Prevention of Future Death Report to both NHS England and Essex Partnership University NHS Foundation Trust.

“Kirk’s family have been devastated by his loss, we hope that changes can be made to ensure that other families do not have to suffer in a similar way.”u